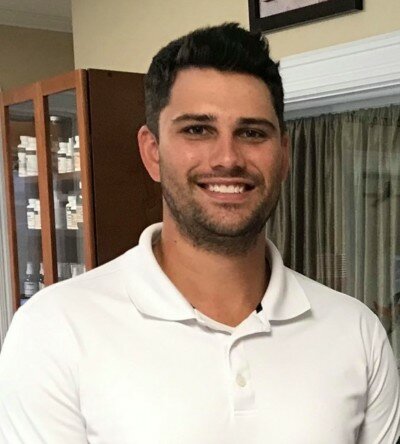 Dr. Williams joined our office in July 2021.  He was first introduced to chiropractic at the early age of 12 after constantly feeling lower back tightness while playing hockey. His parents thought that it would be a good idea to go see the local chiropractor and he was amazed with the relief it gave him. From that day forward, chiropractic was his first choice for musculoskeletal injuries.

Growing up in nearby Westport, Ontario, Dr. Williams was an avid hockey and baseball player. He played his minor hockey career for the Rideau St. Lawrence Kings “AA” and Upper Canada Cyclones “AAA” organizations. He then went on to play Junior hockey for the Westport Rideaus and Smiths Falls bears, before finishing his career with the University of Toronto Varsity Blues.

Dr. Jarrett first started his baseball career playing little league for the hometown Perth Royals before graduating to the Brockville Bunnies. Once hockey started to take up most of his time, he then switched to fast pitch softball playing for the Napanee Express. During his time there, he was able to win 2 silver medals at the Canadian Nationals along with being named to the all tournament team for best 3rd basemen.

Dr. Williams specialty is manual manipulation of the spine and extremities, muscle and trigger point release using ART (Active Release Therapy), activator, and kineseo taping. It is his goal to treat all members of the community in an individualistic manner that optimizes overall health, recovery and quality of life.

Away from the office you can find Dr. Williams on the golf course or fishing the Rideau system.

Refresh
Please enter the numbers and letters you see in the image. Note that the case of the letters entered matters.*:
There are some invalid fields. Please wait...
Message has been successfully sent.